Expert Advice: 10 Tips For The Best Start To Your New Career In Sound Design

In the early days of film production, sound design simply didn’t exist. Instead, live music was played to accompany silent films. We’ve come a long way since then. 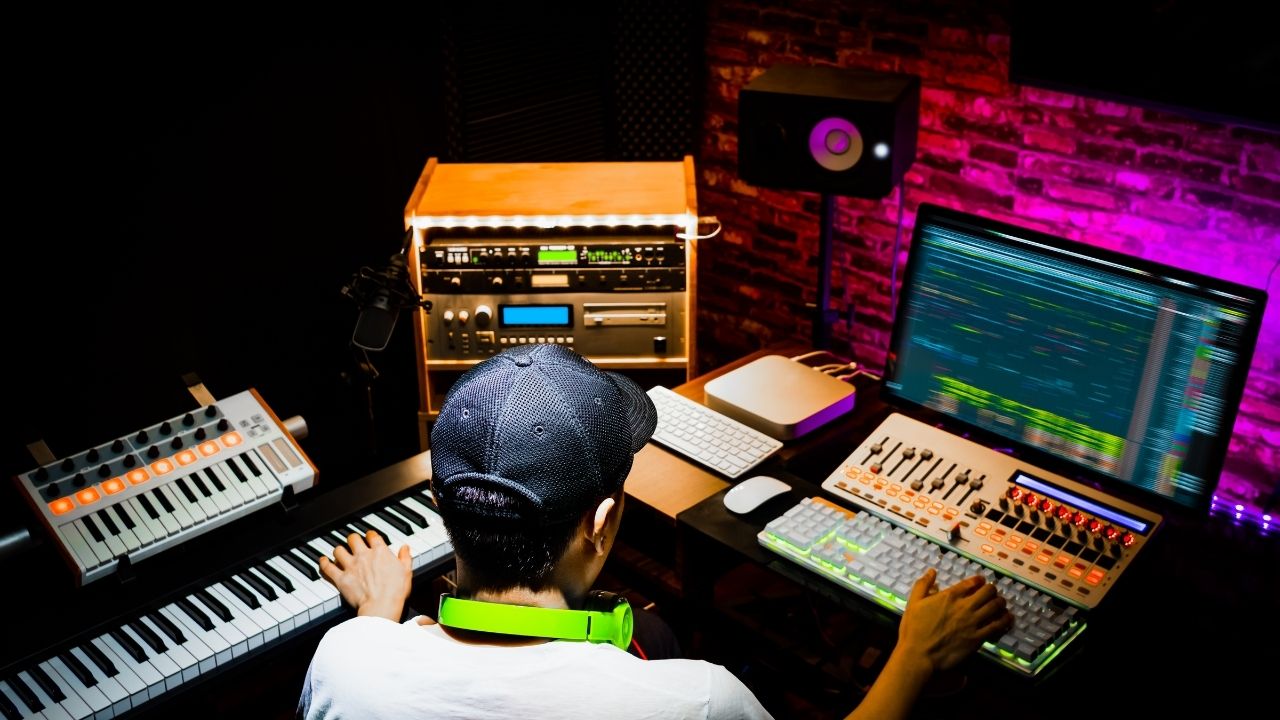 Here at Krotos, we understand the daily challenges experienced by Sound Designers and have made it our mission to provide solutions through our plugins and sound effects libraries.

But some questions can’t be answered with software or other forms of gear we typically lust over at the start of our careers!. One of the most common questions we get is, “how do I get started in sound design?” Well, we approached Krotos customers, who are some of the best minds (and ears!) in sound design, and asked them exactly that. So, let’s find out their top tips for starting out and standing out in sound design.

Note: Find all the contributor credits at the foot of the article.

1. Listen To Your Surroundings With A Critical Ear

Be a sound critic everywhere you go. Experience the sounds around you as though you were listening critically to a movie.

Justin French (CEO & Creative / Audio Director, Dream Harvest) recommends that you should “learn to critically listen to your surroundings and take note of how every sound reacts to a room or space. This is an essential skill when mixing sound effects in order to make them sound natural”.

Once you start thinking like this, everything changes. The way you listen to the world around you becomes research for your next project.

Sound Designer, Tzvi Sherman suggests breaking your designs into mini stories. Every aspect of a scene has its own story to tell. Of course there is the broader narrative of the movie/game/TV show you’re working on, but there are smaller stories to tell.

“Take, for example, the story of a single punch being thrown in a fist fight – how much wind up is there? Light whoosh or heavy whoosh? Does the character’s clothing matter, and should some flavour of that be included? What’s the punch connecting with and should it be hitting bone or muscle?”

“By focusing on moving the audience from one punctuated moment to the next, you’re masterfully telling smaller stories within a much larger one and those will be the sonic experiences people remember.”

It sounds silly (and obvious) to say this, but it’s true that without sound design the movie/game/TV industry would be a whole lot different – and not in a good way.

Sound design is an absolutely vital part of every modern production. However, to those not in the industry it can seem like sound in production is a naturally occurring thing. As though, when you film a scene, the sound is just there. I suppose if a Sound Designer is doing their job well, it will generally go unnoticed, so it’s par for the course.

In that respect, don’t expect to be lauded for your amazing sound design, it will often go unnoticed by the general public and the Director will get all the credit for the amazing immersive production… and we‘re cool with that!

4. Think Outside The Box

Sound designing is an art, and part of that art is recognising when something works – even if it “doesn’t make sense” on paper. When working on sound for a scene, the literal choice isn’t always the most effective.

Bryan Thompson, Creative Lead at endHaven Productions recommends that you should first start with what you might consider the obvious choice. But then try something obscure, or something that shouldn’t work.

“I often find the alternative option to be superior, or at the very least it will blend nicely into the basic design, creating something unique but not too left of centre. Many successful sounds aren’t what you think they are, the trick is to do no harm to the project, but stick out enough to grab the audience’s attention. Good sound can breathe life into a project, or change how a scene ends up playing out.”

It’s in these moments that creative excellence is found. We’ve all heard of tales in which the happy accident makes the final edit. Take advantage of this, after all, experimentation leads to innovation.

However, it’s also important to keep in mind that when you take risks, the chances of something going wrong are increased. But don’t be afraid to take chances; and be patient. As Drew Krassowski (Composer / Sound Designer) explained to us:

“Experimentation can absolutely go wrong more than it goes right, so have patience with the process. You’ll probably end up solving a different problem because of it.”

“The more you experiment and mess around with stuff, the better your intuition will be when you need to make a sound you haven’t made before, or, perhaps more importantly, invent a sound.”

“That wacky sound you made in your bedroom one time might be the inspiration for a sound you later make that becomes part of a series’ brand.”

“Creativity is contagious – pass it on.” –Albert Einstein

Bounce ideas off the people around you, and use them to your advantage. We’ve all been impacted by the pandemic recently and the opportunities to share space with friends and colleagues have become few and far between. So, do what you can find yourself rubbing shoulders with like minded creatives. Composer and Sound Designer Joshua Fielstra says:

“Make every effort to build sincere relationships with genuinely creative people. For example, volunteering to help with music / sound design on someone’s theatre performance, school project, short film, or even wedding tech. Despite them not necessarily being “industry” gigs, things like this have led to me building experience and creative relationships that later propelled my career. In short: say yes!”

Embed yourself in or around creative teams, even if the role isn’t directly creative. This can be easier said than done, but by finding roles near the role you want, you increase your chances of being seen.

Timothy Dodds (Sound Designer / Media Composer) told us that by making yourself a “pleasant nuisance” and “showing an interest” you can find yourself being seen more and more.

“I originally worked as an Editor at an education company, and as we moved more towards internal product development, I was able to involve myself on teams making things like apps and videos. Wherever I saw an opportunity to do things like music and sound design, I just did it… Gradually, I just sort of became the ‘guy who does that stuff’ and became a full-time member of the creative team.”

Make sure you talk to the people around you and make use of their knowledge. Ultimately, just because you think something sounds right, doesn’t mean it is. Use your network of creative people to deconstruct your ideas and rebuild a great sound.

In other words, leave your ego at the door. The sound design community is a friendly, tight-knit bunch who love to help one another.

7. Be A Master Of Your Own Time

This is a biggie! Evan Dockter stresses that if you want to be a successful Sound Designer “you need to master organization and time management above all else. You can be the greatest Sound Designer on Earth but if you cannot meet your deadline or your work is disorganised and difficult to mix, you will not get hired”.

This is great advice. Jot your ideas down, brainstorm on paper or in your notes on your phone. It’s very easy to lose track of a project by getting fixated on a specific element that might not even be that important to the overall project. So prioritise, and plan ahead. It doesn’t mean you can’t change your plan, but it does mean you can make calculated choices when required.

“Record that fire and learn everything by trial and error. Put yourself in the audience’s shoes and make it sound like YOU want to hear it.”

It sounds almost ridiculous, but this is excellent advice from Composer Sacha Hoeedmaker. When was the last time you heard of someone, super successful in their field, who says they did everything by the book? The world loves a maverick, so make your mark!

9. Choose Tools That Help You Stand Out

Sometimes staying ahead of the competition means choosing tools that help you get the job done efficiently and effectively.

John Harvey (Sound Designer / Composer) says, “make your sounds stand out by using unique plugins like Reformer Pro. The more unique your sounds are the better chance that they will stand out from all other sounds.”

At Krotos, this is exactly what we set out to do; to develop innovative audio software that fundamentally improves the way sound is made and performed. Choosing the right tool is imperative to allow your creativity to flow. Ever heard of the saying “if all you have is a hammer, everything looks like a nail”? Don’t let the tools you choose dictate the things you create. The right tools don’t get in the way of creativity.

10. Don’t Be Afraid To Make Mistakes

Even the best make mistakes. It’s important to always remember that. In fact, make mistakes! Grab the bull by the horns and get creative. Yes it might go wrong occasionally but use those occasions to your advantage and learn from them.

That said, you can also learn from the mistakes of others. If you’re interested in finding out about some common mistakes that Sound Designers should avoid making, you’ll love our next article.

>> Common Mistakes To Avoid Making As A Sound Designer

This article was a collaborative effort

A huge thank you to the Krotos community and sound professionals that helped us create this blog. We’ve mentioned before that the sound community loves to share, and here they’ve given us some really sound advice.