Hidden Level Audio Jumps in the Driving Seat and Takes Igniter For a Joy Ride!

John Winters and Chad Tenwick from Hidden Level Audio are currently working on the car engine sound effects for a retro driving video game. In this video they talk us through their process for sketching out vehicle sounds efficiently using Igniter.

“I mean, you can’t get much better than this. He’s literally driving as he’s watching the car move down the road, he’s literally throttling Igniter and it sounds exactly like what the car would be doing.”

In the video they discuss some of the great features of Igniter that allow you to create car engine sound effects that reflect the vehicle’s perspective. Such as how much tyre / engine / exhaust noise you should hear. All easy to set and adjust in Igniter.

Hey, how’s it going? This is Hidden Level Audio. And once again, we are taking a look at Krotos Audio Igniter. All right, well, let’s take a look at Pro Tools and Igniter and see what this video is all about. Okay, so what we’re looking at here is this is the Igniter interface, which we have taken a look at before. Once again, Igniter has four different tabs to go through to create the sound. The granular shows the engine and the exhaust blend and you can blend the two right there. Synth gives you a couple of different synthesisers. You can go through to blend in with the sound. One shot, which we’re not using today, has different samples you can put in there and Loop has sounds you can put in. And it literally goes in between all the different sounds, as you rev your engine. I’m going to have Igniter make some sound by clicking the engine button. And then I’ll start it down here to the left. And then as I rev it up, you’ll see all my automations do its thing. Let’s get Igniter to make some sound. So first off, I have Igniter over here as a plugin just in Pro Tools, I have it on an auxiliary track.

And what’s cool about Igniter is with those four tabs that I was talking about, the granular, the synth, the one shot and the loop, you can have them break out into different tracks. So right now I just have them into three of them. I have a granular track, a synth track, and a loops track. And in Pro Tools, what you do is you have your Igniter up here on your main track here. And then you just go over to your audio file or your audio track or an auxiliary track, you click your input, you go to a plug in, you go to Igniter, and then you pick the different ones here. So here’s the granular output as my input, granular output. And so anything that comes out of granular here goes to this track right here. So, yeah, as you rev it up and we’re just hearing this granular track right here. So if I go over here to synth, it’s kind of low, but as I rev it up.

And so with those two combined.

I mean, this programme, you can’t get much better than this. When John made this, he’s literally driving as he’s watching the car move down the road, he’s literally throttling this programme and it sounds exactly like what the car would be doing. What we’re going to do is we’re making videos for what we want the sound to sound like ultimately when we put it in the game, but we’re still going to use this programme to break down bits and pieces of loops to integrate it into game audio as well, for sure.

The last layer of the sound that we’ve built for this car so far is this loop layer. And you can see here, you drop in different sounds for it to loop through. And you can see as you go through, it goes through the different samples, you can see them. The position jumps for each different part here. And this is just like an asphalt asphalt sound. And it’s three different asphalt sounds. As you drive faster, it goes up, so 30 kilometres per hour, 50, 60, 70. So as you go up, it goes up with it and you can see the gain of each one go up with it. So let’s start up this. Let’s start our engine again and take a listen to just what the asphalt sound is doing. It is kind of low, it is kind of quiet, but it is there. So let’s start her up. Just turn her up here then as I go up. And so that’s just happening really subtly under everything else. It’s one of those things. You don’t necessarily hear it until it’s gone, you know what I mean?

Yeah. And it’s nice to be there. And that’s the good thing about being able to print it and break it out into the different layers. So you can kind of use a little bit of this, a little bit of that, and as it’s own individual file as needed.

Right. So in other words, you’re not going to necessarily turn everything down based on what you’re seeing visually on the cinematic when you’re creating it. But you go through later in post and you can just attenuate everything, automate everything the way you need it, based on the perspective and what feels right.

Yeah. We have some skidding sounds, some atmosphere, a crashing sound. Then here’s our Igniter over here and some music. So what we’re seeing here is the actual automation of our revs on the granular path. Here it goes.

And you can see how when you got on the fast straightaway, like it was really starting to kind of go for it and then we never really go full throttle because I feel like you want to go on a real long straightaway with it but you could definitely see how it follows as he goes faster and changes. And I literally would just drag this rev thing and just go with it. And I watched it a few times, maybe rerecord a couple of parts of the automation and then you can go in there by hand and kind of do some lowering or take like a section and lower a section or take a certain part and lower it. You have all sorts of different options on how you want to detail your car moving.

Right. It’s like you kind of want to do a pass where you’re doing it intuitively and then you go back and you can just fine tune it by hand and then also this little green block will eventually turn into a delivery truck, too. We’re not dealing with a Lamborghini here or anything so we’re doing just a normal car going pretty fast down the street. It’s kind of what we’re emulating.

So that’s just a real quick overview on how we were to make car sounds for this game as just a demo to pump out something of this is kind of what we think. What do you think? Get some feedback and then we can kind of go from there.

Yeah. That’s one of the great features of using a plugin like this is our customer just wanted us to just spitball some sound. John spent the better part of a day putting all this together, putting a full session together, and it’s basically ready to rock. He’s thrown it over the wall to me. I’m just going to do some automation. I’m going to add a few extra things here and there and just add what it takes to make it shine a little bit and then we’re going to present it to the customer and then we just kind of see what they want from there and we can always go back to Igniter, use different car engines, use different sounds or anything like that. It was a painless process to just jump into Igniter, rev the car and intuitively work the throttle, as it were, via the mouse. And there you go versus throwing in samples from other audio packs or something, then trying to make them work into the sound of the game. This way we can just use a plugin.

Well, right on. Thanks again for checking out this second look at Igniter from Krotos Audio. We are Hidden Level Audio he’s Chad, I’m John and yeah, we look forward to any kind of feedback and catch you on the other side.

Why is using Igniter better than the traditional way of cutting car engine sound effects?

If you’ve ever attempted to piece together a vehicle scene by cutting and laying manually you’ll understand the struggle!

“Cutting revs and piecing together vehicle content to fit a scene can be very time consuming and there are always compromises.” – Mark Kilborn (Sound Designer) Call of Duty, Black Ops3, Call of Duty WWII

Igniter gives you the control to design vehicle sounds through the plugin in a much more intuitive way. You can “drive” the vehicle using a MIDI controller, making perform to picture a cinch.

“That’s one of the great features of using a plugin like this is our customer just wanted us to just spitball some sound.” – Chad Tenwick (Sound Designer) Hidden Level Audio

Igniter allows you to perform and automate over 600 parameters

What if something needs changing?

Imagine creating all of this, the traditional way, and then some vehicle expert points out that the engine noise is from the wrong vehicle! Back to the drawing board? Nope. Igniter allows you to replace the samples used and keep all your automations in place. Easy.

“And there you go! Versus throwing in samples from other audio packs or something, then trying to make them work into the sound of the game. This way we can just use a plugin.” – Chad Tenwick (Sound Designer) Hidden Level Audio 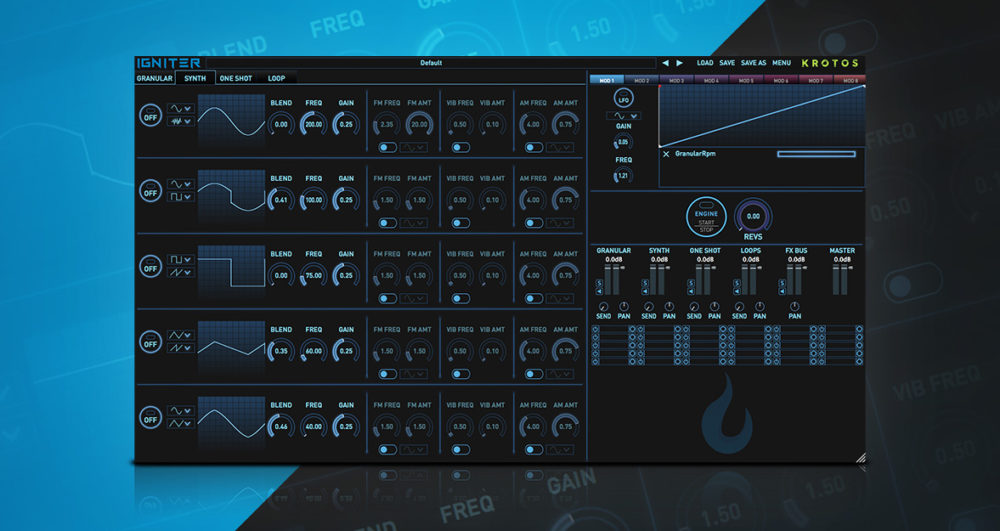 Driven Creativity In SoundIgniter is the new industry standard for creating any real-world or sci-fi vehicle...
$478.80

How to Create Vehicle Sound Effects

How to Design Robot Sound Effects with Igniter