Doom, Duke Nukem, Quake – these are some of the most popular franchises in the ‘boomer shooter’ a.k.a, retro FPS (First Person Shooter) genre, and we are seeing new takes on the formula due to their fun, challenging gameplay and nostalgic charm.

One title which does this very well is Turbo Overkill – and here at Krotos, we were of course keen to find out about the sound design behind this neon-soaked retro rampage! 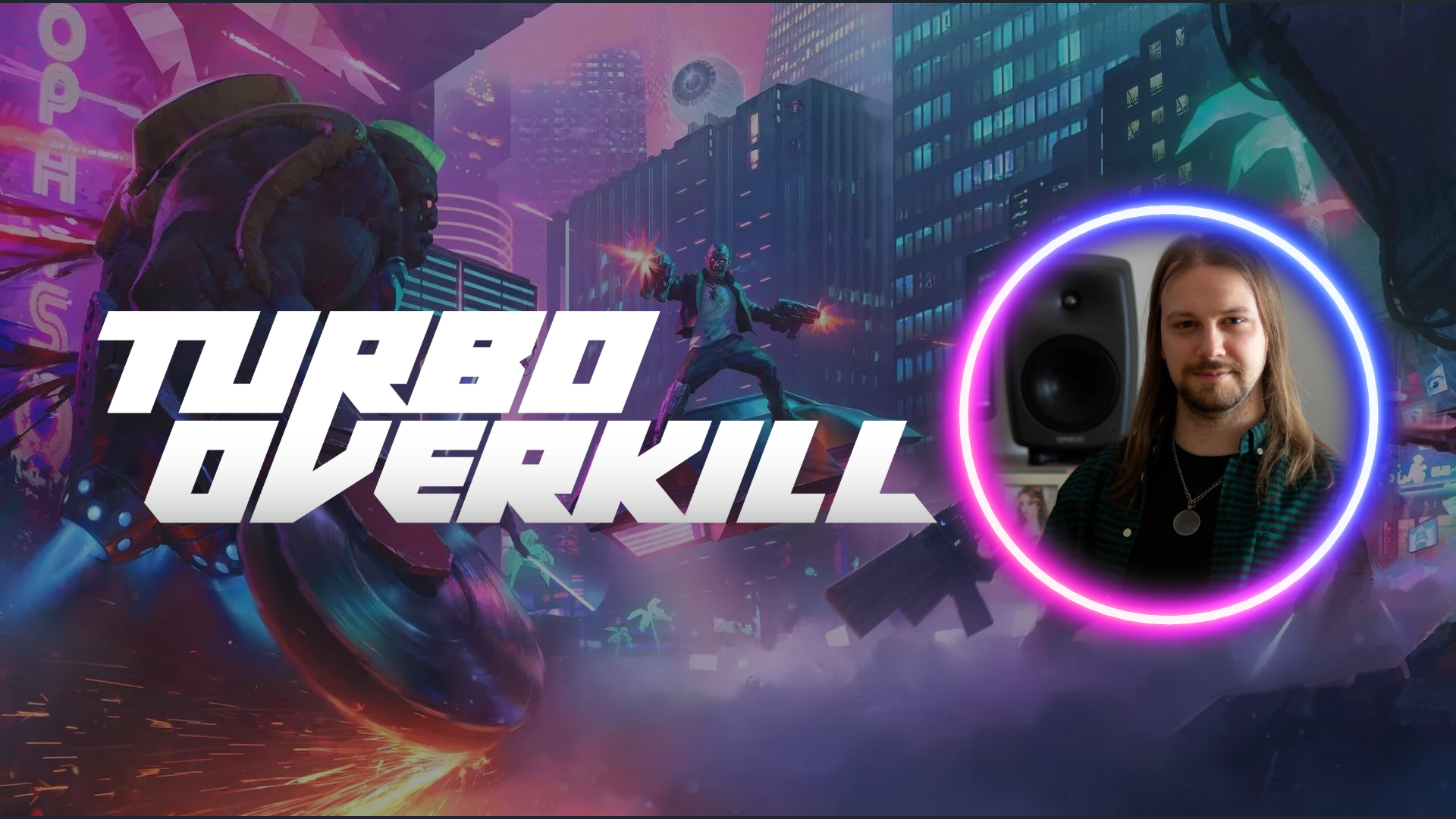 We caught up with Nikita Jeremic – A composer and sound designer who has contributed to many gaming projects including Warhammer, Cyberpunk 2077 and Scathe, as well as Turbo Overkill.

We asked him all about his process, which included the use of Weaponiser – grab it half price this Black Friday!

Turbo Overkill is a chaotic romp of an FPS game. How did you incorporate those futuristic elements into the sounds?

Being a sci-fi game set in the distant future, all bets were off when it came to sound design and music. We had unlimited creative ideas to make this game sound truly out of this world.

The most important thing was finding the balance between subtle and over the top. There are some pretty quirky and straight-up funny moments in the game such as rappelling down a building by hanging from your enemy’s intestines, then there’s the music for the gun and upgrade shops in the game.

It’s those few rare moments in the game that break up from the gritty and straight-up brutal world of Turbo Overkill!

Turbo Overkill is most definitely…Turbo. Its gameplay is incredibly fast-paced. What considerations were there to balance such a dense soundscape of music and SFX?

Most of the audio mixing was done by our developer Sam Preble inside the Unity game engine itself. Sam has a great ear, and it was mostly his own vision regarding the balance between SFX and music.

As you said, the game really is “Turbo”, but we didn’t want to go “Overkill” …pun intended! When everything is screaming at you, it quickly causes ear fatigue for players.

We agreed that the sound effects are the major thing we wanted to be present in the mix, with music adding a bit of that “drive” element to it all and keeping things interesting, without interfering with SFX.

There are many areas in the game where you get surrounded by swarms of enemies, so we had to pay close attention to having a clean mix of all the elements.

There are 5 of us in the audio team –  Me, Chipper and Tim, whilst game developer and creator Sam works with me on sound design and our audio producer Jeron oversees everything.

Turbo Overkill episode 2 has just been released – what new elements and ideas were brought to it?

Mostly, we have a whole bunch of new music which fans if the game like more and more with each new level. That’s so encouraging for our entire music team.

In this episode, we wanted to step away from the Cyberpunk/Synthwave style and dive deeper into electronic industrial sounds. Players are aware of Syn, the main antagonist, and we wanted to provide audible feedback so players know that they are entering Syn’s domain and out of  the neon lights of episode 1.

There are new enemies, new creatures, and most importantly three new bounty hunter bosses to content with, all with excellent new sound design elements.

How did Krotos play a part in this project? What software/libraries did you use?

Most of my sound design in Turbo Overkill is weapons and cinematic cutscenes. Weaponiser still remains my go-to tool for all gun sound effects and one shot SFX that require multiple variations. It’s just a bread and butter tool for me.

However, I am also using (and loving every second) Krotos Studio in my workflow – especially on cutscenes where I need to cover all the atmospheres, Foley etc. There is no doubt in my mind that Krotos Studio will become an industry standard, and I stand firmly by that statement!

Could you pick a favourite weapon from the game and tell us how you made it?

The dual pistols! They are the first gun sounds I designed for the game and they still remain my favourite gun to use. It’s rare in games that the first weapon you have available is also the most useful one!

Those guns are designed from a combination of Colt Python revolver recordings, mixed with a sound of hammer hitting the anvil, and some synth-designed laser shots. Once you balance those elements, you get some really nice gun sounds with a lot of kicking and plenty of smack!

I used Weaponiser for this, of course!

I layered those elements and balanced their levels inside Weaponiser’s engines. I then sent these four layers as separate outputs for parallel processing with EQ, parallel compression and a lot of tube distortion.

All of this then went into a Transient Designer, to tweak the transients and give more punch to these guns.

The main thing I had in mind is the protagonist, Johnny Turbo, is a cyborg, and I wanted to portray that through his guns, hence the parallel processing.

The music has such a great balance between sci-fi and retro – single-sample riffs pitched up and down that are reminiscent of the older generations of games, combined with polished drum sounds and synths that are so carefully arranged. Was it fun trying to strike that balance?

I am sure I can speak on behalf of the entire music team by saying this – working on Turbo Overkill’s music is a dream experience. Having so much creative freedom to experiment with different sounds is so much fun, and composing this soundtrack is still such a learning experience.

There is just so much music in this game, and we keep getting positive feedback from our players, which is of course a fantastic compliment for any composer.

Each new level has a new set of music – you will never hear two of the same track on level, or even between episodes 1 and 2.

The main goal is to pay homage to this amazing era of late ‘90s, early ‘00s retro shooters that we grew up on. That is why our dedication to this project can be heard and it’s very humbling that it’s also being appreciated by large auditorium of fans.

Save 50% on Weaponiser, or any of our plugins, bundles, libraries or upgrades this Black Friday 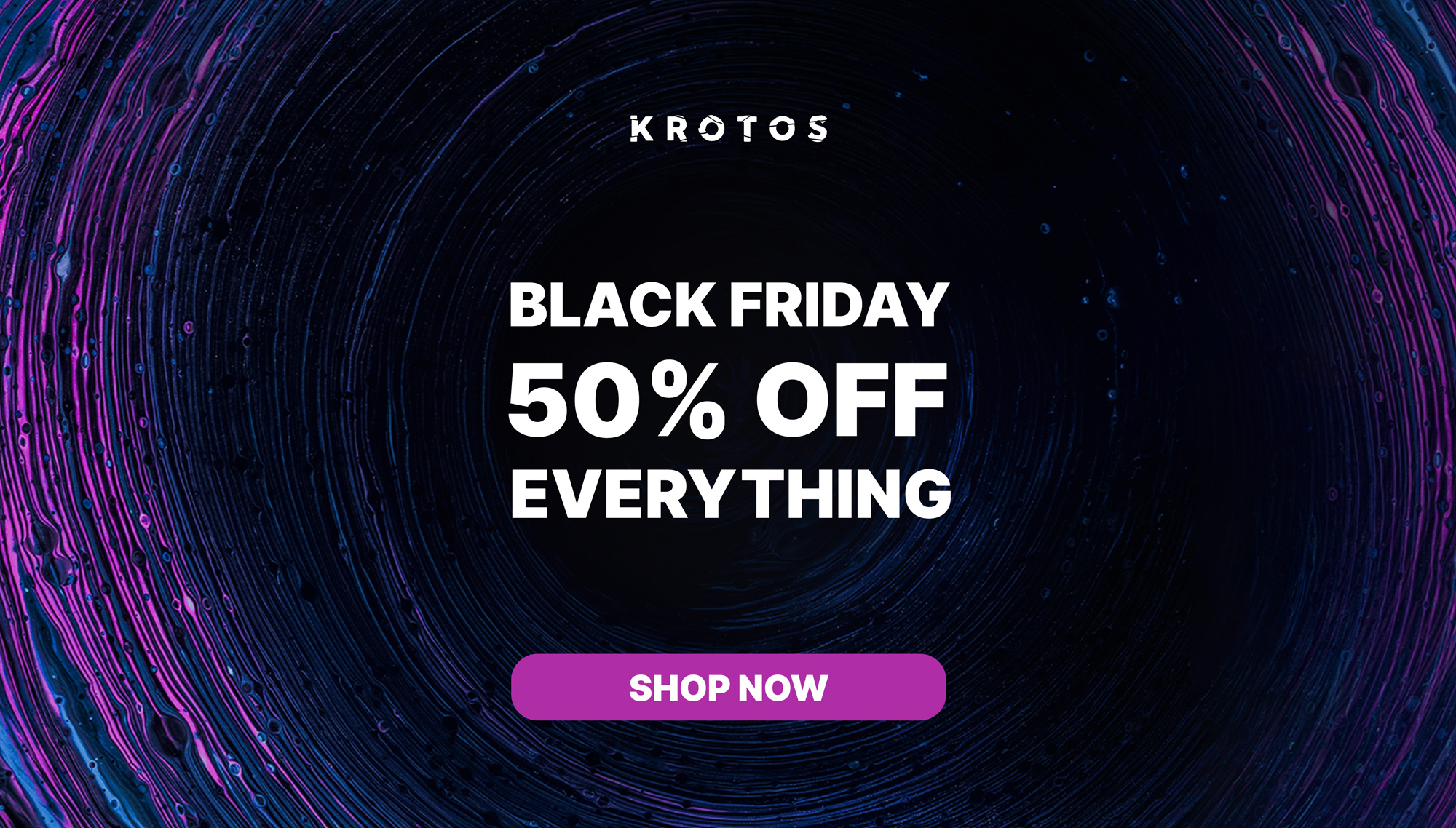 Read More from Nikita Below!

Nikola Nikita Jeremić gets musical with Weaponiser and Concept 2. In this short video Nik uses...